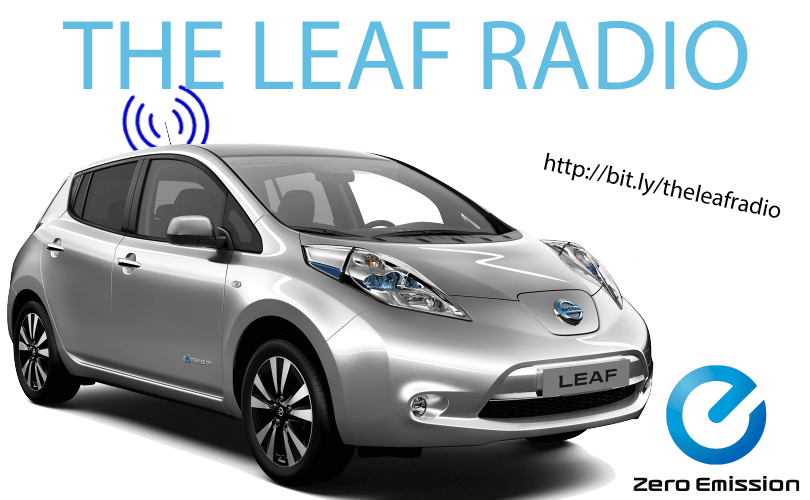 Welcome to THE LEAF radio,

With all you leaf news.

Nissan gets 9,000 orders for the new Leaf in less than 2 months
Nissan unveiled the next-generation Leaf last month and the automaker has gradually started rolling out the new all-electric vehicle to a few markets.
The vehicle is apparently off to a relatively good start as Nissan confirms that it got 9,000 orders in for the new Leaf in less than 2 months.
The 2018 Leaf has been available in Japan since last month and it launched in Norway, Germany, Austria, France, and Holland earlier this month.
The new electric vehicle has yet to launch in the US. It is expected to arrive at American dealerships in “early 2018”.
https://electrek.co/2017/10/27/nissan-new-leaf-sales/

Mercedes-Benz announces electrification of all commercial vans
Daimler has unveiled a new part of its electrification plan today.
Mercedes-Benz will add electric drive to all its commercial vans and it is starting by taking orders for the new eVito all-electric van.
The eVito is a mid-size van with a 41.4 kWh battery pack for a range “around 150 km” (93 miles), according to the German automaker.
With a 84 kW electric motor, the van can achieve a top speed of up to 120 km/h (74 mph).
They are starting to take orders for the new electric van now, but the vehicle will hit the market in the second half of 2018.
https://electrek.co/2017/11/20/mercedes-benz-electrification-of-all-commercial-vans-all-electric-van/#more-56555

Uber orders whopping 24,000 Volvo XC90 plug-in hybrids for fleet of driverless Vehicles
This morning Uber Technologies Inc. announced that they have agreed to purchase 24,000 Volvo XC90 plug-in hybrids from the Swedish company for a fleet of driverless cars.
Let that sink in for a moment, 24 thousand self-driving sports utility vehicles. That is 10,000 more than the number of yellow cabs in New York City.
The Volvo XC90’s are of the plug-in hybrid variant and will be delivered between 2019 and 2021. This is the first commercial order of a ride-hailing provider, according to Volvo.
Uber will add its own sensors and software to enable driverless operation.
While Volvo has said to be committed to electric vehicles promising to at least hybrid-ize all of its vehicles by 2019, Uber seems to be committed to replacing their highest cost factor,
namely human drivers in its on-demand taxi service. The San Francisco based company already agreed to use 100 XV90’s in self-driving tests in Pittsburgh.
https://electrek.co/2017/11/20/uber-volvo-xc90/

Nissan Leaf battery news
Battery replacements are now available for purchase at your certified Nissan LEAF dealers in the United States. The suggested retail price of the Nissan LEAF battery pack is $5,499.
This price includes and requires a return of your original battery pack (valued at $1,000) to the dealer in exchange for the new battery.
This price does not include tax, installation fees or an installation kit required for 2011 and 2012 vehicles.
The MSRP for the installation kit (which includes brackets and other minor parts required to retrofit the newer pack to original vehicles) is approximately $225.
Nissan expects the installation to take about three hours. However, dealers set the final pricing, so we recommend confirming with your local retailer.
Replacement packs will carry similar warranty coverage as a new LEAF: 8 years/100,000 miles against defects and 5 years/60,000 miles against capacity loss.

In an unusual marketing move, Nissan is promoting the Leaf electric car by going to the last place you would see one, a gas station.
Actually, Nissan is going to multiple gas stations in the Northeast and Mid-Atlantic states, and the promotion involves giving people free gasoline.
Nissan will “take over” gas stations and give away gasoline to people that come. The company will also have a Leaf on display.
It seems the idea is to give people a sense of what it’s like to not pay to keep your car fueled, which would be the case if they were driving a Leaf.

Two million electric vehicles (EVs) were on the world’s roads in 2016, according to the latest edition of the International Energy Agency’s Global EV Outlook.
China remained the largest EV market in 2016, accounting for more than 40 per cent of the electric cars sold in the world.
More than 200 million electric two-wheelers and more than 300,000 electric buses made China by far the global leader in the electrification of transport, according to the IEA report.
In Canada, the electric car stock (battery electric cars and plug-in hybrid electric cars) rose to 29,270 last year from 17,690 in 2015.
However, the EV market share in Canada last year was at only 0.59 per cent, up from 0.39 per cent in 2015. Worldwide, EV’s market share lifted to 1.1 per cent in 2016 from 0.85 per cent the prior year.

Chevrolet has been slowly rolling out the Bolt EV to more states ever since the car’s introduction last December.
Originally, the Bolt was supposed to go on sale in all 50 states as of September 2017, but General Motors has moved up its plans.
GM representative Fred Ligouri confirmed recent reports that the Bolt EV will be released nationally in August.
He also mentioned that cars will be delivered to an additional five states at the end of this month for a total of 21 states since the December launch.

If Tesla sticks to its Model 3 production plans, it is literally just weeks away from the start of production at their Fremont factory.
In preparation for it, its Model 3 release candidate test program has been expanding and the vehicles have now been spotted in several more regions around the US.
During Tesla’s previous test program, like with the Model X in 2015, prototypes had mostly been spotted in California – especially Northern California in Palo Alto near Tesla’s headquarters.
It was the same thing for the first few months of the Model 3 release candidate program.
But now more and more Model 3 prototypes are being spotted every day and not only around Palo Alto.
Last week, a Model 3 was down in Harris Ranch near Bakersfield and now it’s being spotted in other states.
A red Model 3 prototype was spotted yesterday at the Supercharger at Tesla’s Salt Lake City store in Utah.

On June 10 Tesla started the rollout of a new software update for its fleet of vehicles equipped with second generation Autopilot hardware.
The new update features what CEO Elon Musk called a ‘silky smooth’ new control algorithm for Autosteer, as well as automatic perpendicular parking and automatic display brightness adjustments.
The software update also includes full speed Automatic Emergency Braking (AEB), which was previously restricted to low-speed.
A Tesla spokesperson confirmed to Electrek that the update is not being pushed over-the-air yet, but it is being rolled into the new vehicles coming out of the Fremont factory and vehicles going into service.
By the end of the week, the fleet should start receiving the update over-the-air as promised by Musk at the shareholder meeting last week.
Some Tesla owners had complained that the Autosteer and TACC were rougher than what they were used to with the last few updates, but the CEO reassured owners last month by saying that an upcoming new algorithm would fix that

Electric car pioneer Nissan was an early pioneer of EV technology in Britain – and is now benefitting from this by commanding 50 percent of the UK new electric vehicle market in Q1 2017.
Britain is also the third-largest global market for the Nissan Leaf EV, behind only the U.S. and Japan, and is the biggest nation of all for the e-NV200 electric van.
Success in Britain has played a big role in helping the Leaf become the world’s best-selling EV: every year since its launch in 2010, 1 in 4 Leaf sales throughout Europe has been in the UK.
Sales have grown rapidly too – it took Nissan four years to hit 10,000 sales in Britain, but little more than a year to reach 15,000.

The next Nissan Leaf will be revealed this September, the brand has confirmed on its its Nissan Electric Twitter account.
The new model will get a more aggressive design inspired by the Micra.
The image hints at more angular lines and harder edges for the car’s design, something that would contrast its soft-looking predecessor.

Taxi companies and drivers are increasingly looking at electric vehicles to cut their operating costs.
Nissan calls it a “global electric taxi revolution” and claims that the Leaf is leading it as more and more taxis are using the all-electric vehicle in their fleets.
There are other electric vehicles becoming popular with taxi companies, like Tesla Model S with over 100 units at the Schiphol Airport or Montreal’s growing fleet of Soul EV and Tesla Model S with Taxelco.
But Nissan is having a lot of success in Europe with a fleet of 110 Leafs in Madrid and Uber using a fleet of 20 Leafs in London.